THE POWER OF AN OBJECT: Product Design presentations

Our 1st-year Business Design students show us the meaningful role that can be played by a well-designed object. 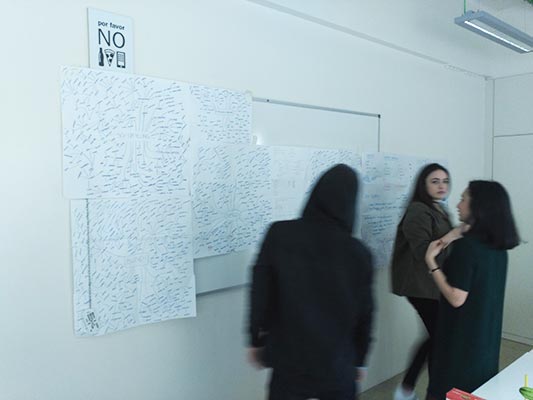 We proposed a challenge to our 1st-year Business Design students for their Product Design project: Design a new object using at least 50% of upcycled materials.

Their lecturer Aviv Shany put a special emphasis on the ideation process behind the object and the starting point for all our students was a blank page they had to turn into a mind map. A mind map is a diagram in which you draw a main idea or concept and then connect it with other ideas or concepts that are somehow related to it forming a branch-shaped scheme, these secondary concepts can be connected as well with other ideas and concepts. It is a tool that allows us to let our thinking free and, at the same time, structure it establishing connections between concepts.

During the elaboration of the mind map, our students had to keep just one thing in mind, that the goal of their objects was to meet an actual need. This was the only guideline, from there, they had total freedom to draw, write, connect and build their trees.

Today our students have shown us their mind maps and final objects explaining the whole process, from the blank page to the functional prototype. Here we sum up what they have told us! 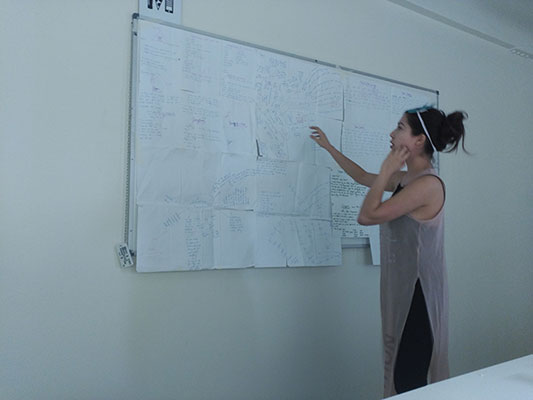 Yasmin has turned cereal boxes into an origami and paper cutting game so kids can spend time of shared play with their parents while having breakfast. Her idea arises from the need for closeness that exists inside families in a moment when technology lead us to spend most of our free time alone in individual activities. The box can easily be turned into an origami set just adding some and instructions on the inside. Yasmin’s project enhances imagination and family time together and, at the same time, educate children –and grown-ups too- in the importance of recycling. 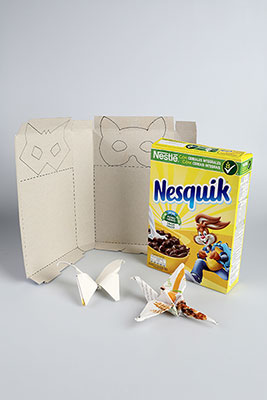 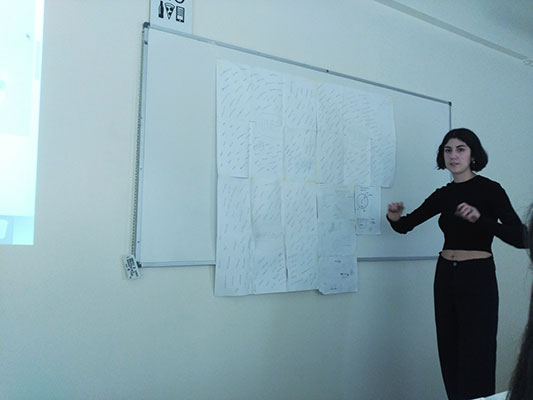 Giorgia has turned spare plastic lids and plates into new cooking tools through the collaboration of brands, students and consumers. She has designed a collaboration with DeCecco in which consumers can leave spare plastic lids they don’t use with their name and address in boxes placed in stores and supermarkets. After that, these materials are put to another use by design students in workshops organised in different universities. Finally, the new objects are sent back to their owners. Her final prototype is a lid turn into a pasta colander that allows the user to cook pasta using only one utensil instead of two. This campaign makes brands, consumers and young students –who will become designers in the future- conscious of the importance to reduce waste developing a circular economy. 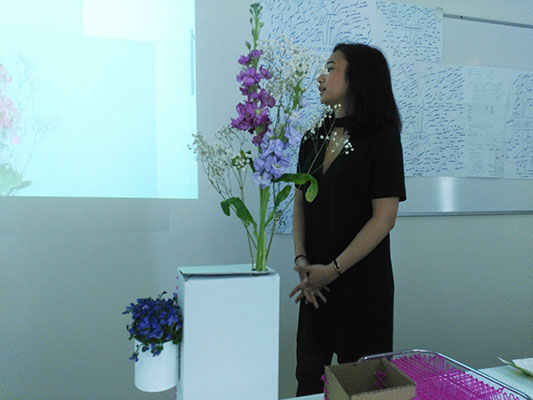 Kai has designed from her own cross-cultural background that merges Philippine and Spanish roots. She has transformed a shoe box into a flower pot using banig weaving, a traditional Philippine technique. She has approached her product as a bridge between cultures that enhances not only respect for the environment by using upcycled materials, but also respect and curiosity for other cultures proving that, when two cultures are mixed, the result is a new -better and richer- scenario. This idea is closely linked to recycling as taking care of the planet is a shared responsibility across countries. 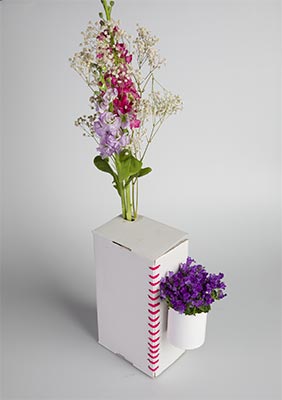 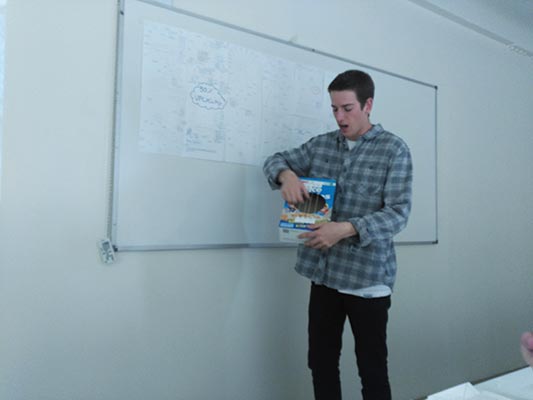 Henry started his mind map researching on the concept of nostalgia. That brought him to cereal breakfasts and music, two evocative experiences that can transport you through your memories and feelings. He wanted to introduce this evocative power in the everyday life turning everyday objects into sound instruments. After many tests, Henry has built his final functional prototype of a guitar made out of a cereal box. Like the origami game designed by Yasmin, this instrument has a triple benefit: creates a connection between parents and children, stimulates imagination and raise environmental awareness from a very early age. 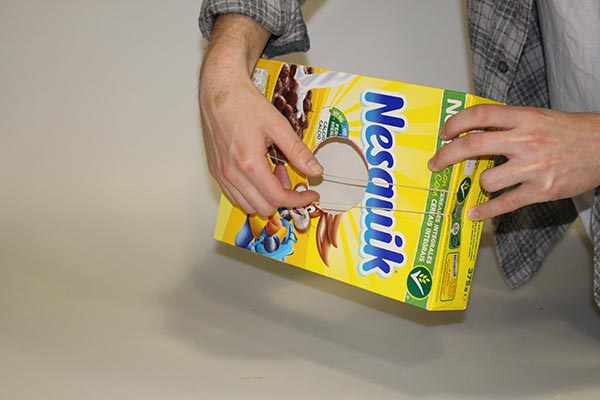 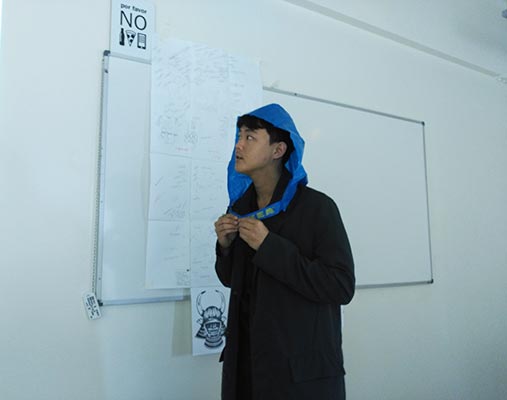 Justin has a mixed background too, he has Chinese and Swedish roots. This is how the concept Slask (Swedish word for slushy snow mixed with rain and dirt on the ground) came out during his mind map and made him realise that if Swedish people needed something it was for sure something that protects them from the difficult weather they have to live with on a daily basis. Could the Asian culture help the Swedish people with that? From that question arose Kabuto, the hat used by the samurais that protects the head and the neck. This hoodie made of IKEA upcycled bags protects the Swedish from their rough winters demonstrating the capabilities of cross-cultural intelligence. 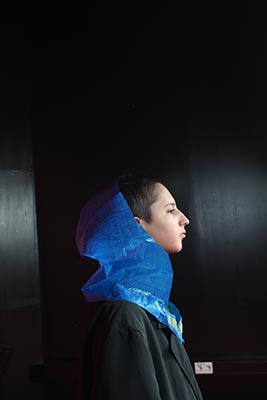 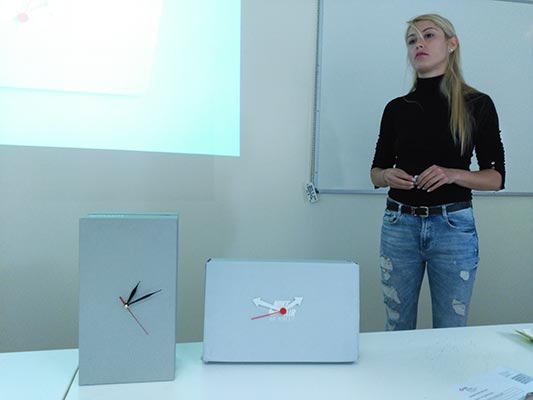 Mariya has focused her explanation in what she has learned from the design process. During the elaboration of the mind-map, she understood that it is a divergent tool and, therefore, its goal is to take you out of the barriers of the logical thinking. In order not to lose focus or control during the process, she has highlighted the importance of knowing your users to broaden the possibilities in a direction that makes sense. This line of thought led her to the idea of control over something huge, which ended in a clock that establishes control over time. Her final prototype is a clock made out of a shoe box that users could build easily and would at the same time be useful for brands. 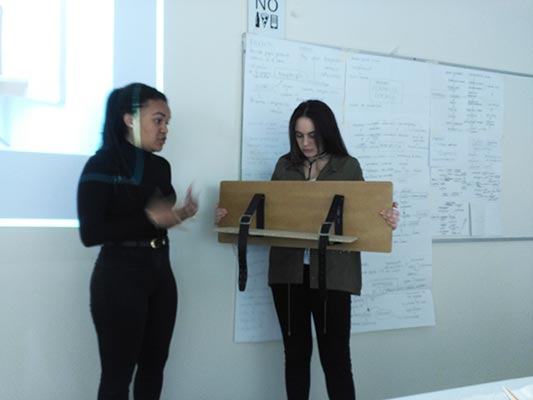 Georgina has explained that she started her mind map a bit lost, but she kept in mind that the important thing was to meet real needs. This led her to think about the ways one can meet needs and brought her to the basis of it: adaptation. Adaptation to the context is key to meet any need. She then explored the idea of adaptation and other related concepts that have to accompany adaptation to actually succeed in front of the appearance of a need: functionality, resistance. That brought her to one object, belts. And to one need really common at today’s homes, the need of adaptable space. Mixing these two things, she designed a shelf made out of belts that adapt to the storage needs of each moment. 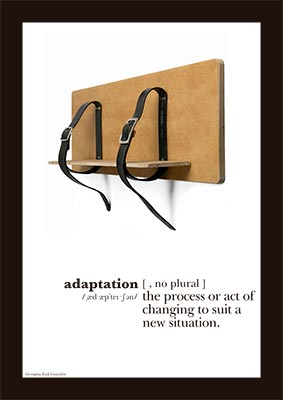 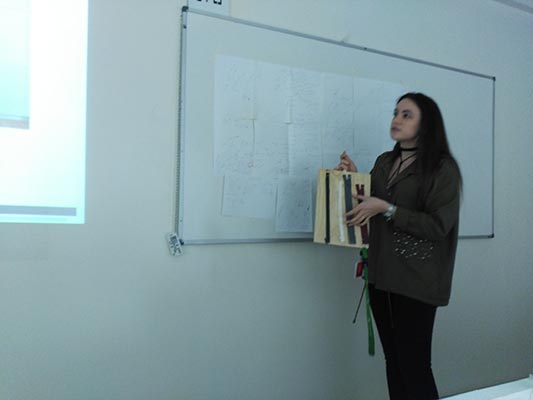 Angela started by the idea of family, then she got to the concept of divorce and that made her rethink the idea of divorce. Although divorce is usually seen as the opposite of family, it is actually a part of it for many people and it still has a role inside it. That made her think of objects that develop their functions after being split, like chopsticks and, finally, zippers. The functioning of a zipper consists, precisely, in moving apart and together. Her final prototype is a key holder made of upcycled zippers. To take your key, you open your zipper and take one of the two halves with you, when you arrive home, you zip it again. This object turns the routine gesture of taking the keys into a reminder that the family is a fabric that doesn’t lose its functions although it goes through changes. 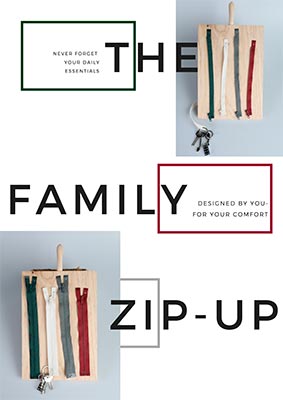 Mark’s starting point was the concept of travel and from that came out the concept of unnecessary procedures and waits that often surround travelling and turn one of the most pleasant human experiences into something dull and tedious. This gap between user needs and the reality of the service led him to think about the difficulties that people with disabilities may have when using tools and objects and how this can turn the most common actions into something really difficult and frustrating. His final product is a glass pot with three different taps that can be used to peel, sharpen and grating. Its design allows people with movement disorders like Parkinson to perform these tasks safely and easily –it prevents them from getting cut and peels/pencil chips… from spreading- Furthermore, this product concentrates the functions of many tools in just one with the consequent saving of resources, space and waste.